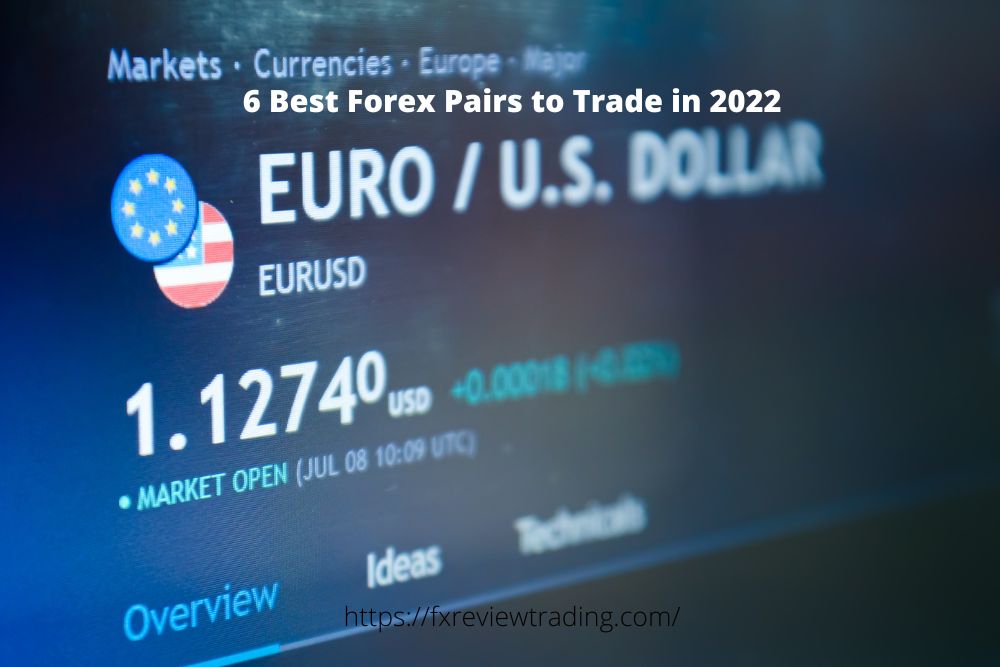 There are a lot of different factors to consider when choosing which forex pairs to trade. For example, some people might focus on the pairs with the most profit potential, while others might focus on pairs that are less volatile and therefore less risky. Ultimately, it is up to the individual trader to decide which pairs are best for them.

This article will look at the best forex pairs to trade-in.

What is Forex Currency Trading?

Forex currency trading is buying and selling different currencies to make a profit. The foreign exchange market (Forex) is the largest financial market in the world, with a daily turnover of over $5 trillion. Currencies are traded on the Forex market by central banks, commercial banks, investment banks, hedge funds, and retail investors.

There are two types of currency pairs:

Major pairs are the most traded currency pairs in the world and include the US Dollar (USD), Euro (EUR), Japanese Yen (JPY), British Pound (GBP), Swiss Franc (CHF), and Canadian Dollar (CAD).

When choosing which currency pairs to trade, it is important to consider factors such as volatility, liquidity, and correlation.

How do Forex Currency Pairs Work?

You essentially buy and sell currency pairs when trading in the Forex market. A currency pair is simply two different currencies paired together. For example, the EUR/USD currency pair comprises the Euro and the US Dollar.

This pair is also popular because it is relatively easy to predict. This is because the two economies (the European Union and the United States) are closely intertwined. When one economy does well, the other usually does as well.

That makes the EUR/USD pair a good choice for those who want to profit from Forex trading.

The US dollar and the Japanese Yen are two of the most stable currencies in the world. However, the USD/JPY is also a very liquid market, which means that there is a lot of trading activity, and it is easy to buy and sell this currency pair.

The USD/JPY tends to be a very volatile currency pair, meaning there can be large price movements. This can be both good and bad for traders. On the one hand, it can make for some profitable trades. However, on the other hand, it can also make for some losses if you are not careful.

The GBP/USD is one of the best forex pairs to trade in. This is because the British Pound and US Dollar are two of the most stable currencies in the world. However, the GBP/USD is also a very liquid pair, which means that there is a lot of trading activity, and it is easy to buy and sell this pair.

The AUD/USD currency pair is one of the best pairs to trade in Forex. Here are some reasons why:

It has a low spread. The spread is the difference between the bid price and the asking price. A low spread means less chance for your trade to lose money.

It also has high liquidity. Liquidity refers to how easily a currency can be bought or sold. High liquidity means many buyers and sellers, and it is easy to buy or sell the currency without waiting for someone to agree to your price.

USD/CHF has a low risk. This means that if you lose money on your trade, you will not likely lose much money.

The two currencies are very closely linked. For example, the Canadian economy relies heavily on exports to the United States, so the CAD value often moves in tandem with the USD.

It is relatively volatile. This means that there are often big swings in the exchange rate, which can provide opportunities for traders to make profits.

The USD/CAD is also an excellent pair to trade because it has low spreads. This means that the costs of trading are relatively low, which can be helpful for traders who are trying to minimize their losses.

There are many benefits to trading major forex currency pairs.

For one, these pairs tend to be the most liquid, meaning there is always a lot of activity and liquidity in the market. This makes it easier to enter and exit trades and get tight spreads.

Another benefit is that they tend to be less volatile than other pairs. This means that there is less risk involved in trading them. Major currency pairs also tend to have very clear trends, making it easier to profit by following these trends.

They are more liquid than other pairs, have tight spreads, and are widely traded.

Liquidity is important because it allows you to enter and exit trades quickly and at the price you want. In addition, tight spreads mean that the difference between the bid and ask price is small, so you can get in and out of trades quickly without losing much money. And finally, being widely traded means that there is always someone willing to buy or sell the currency pair you are trading, so you can always find a buyer or seller.

So, if you are looking for the best forex pairs to trade, consider the major currency pairs. These pairs offer many benefits and can greatly add to your trading portfolio.

Many factors can affect the value of a Forex currency pair. These factors include political stability, economic indicators, and central bank policy.

When it comes to forex pairs, politics is always a major factor to consider. Pairs pegged to currencies from countries with unstable political situations are generally more volatile and risky. E.g., Pairs like EUR/USD (Euro/US Dollar) and GBP/USD (British Pound/US Dollar) tend to be more stable, as the countries involved have strong and stable political systems. As a result, these pairs are generally less risky and offer more predictable returns.

One important factor is the state of the economy of the countries involved. For example, if one country is experiencing strong economic growth while another is in recession, it may be a good idea to trade its currency with a strong economy. This is because investors will likely be more willing to invest in that currency, and as a result, its value is likely to increase.

Central bank policy is one of the most important factors to consider when choosing which forex pairs to trade. This is because central banks set interest rates, which can greatly impact currency values. For example, if the US Federal Reserve raises interest rates, it will usually cause the US dollar to strengthen against other currencies. So, if you are looking to trade forex pairs that are influenced by central bank policy, you should consider pairs that include the US dollar.

What is the easiest forex pair to trade?

What are Forex’s major currency pairs with the most pips?

Pips represent the last decimal place where currency rates were typically quoted (% of points). The spread between bids and offers for major currency pairs and liquid currency exchange rates varies depending upon market conditions and the type of currency offered. Often currency traders search for currency pairs that offer the highest pip value because they have particularly effective short-term strategies, such as day traders. In addition, the value of a pip can depend upon its size and currency. As a result, pips are a useful tool for evaluating trade leverage and calculating the amount foreign exchanges use.

How many currency pairs should I trade with at the same time?

There’s no one answer to this question. It depends on your trading goals, risk tolerance, and other factors. However, most experts recommend only trading one or two currency pairs simultaneously. This helps to keep things simple and limits your risk exposure.

The most popular currency pairs to trade are the EUR/USD, GBP/USD, USD/JPY, and USD/CHF. These pairs tend to be the most liquid and have the tightest spreads. That means they’re usually the best for day traders looking to make quick profits.