How to Invest in Tesla from India? 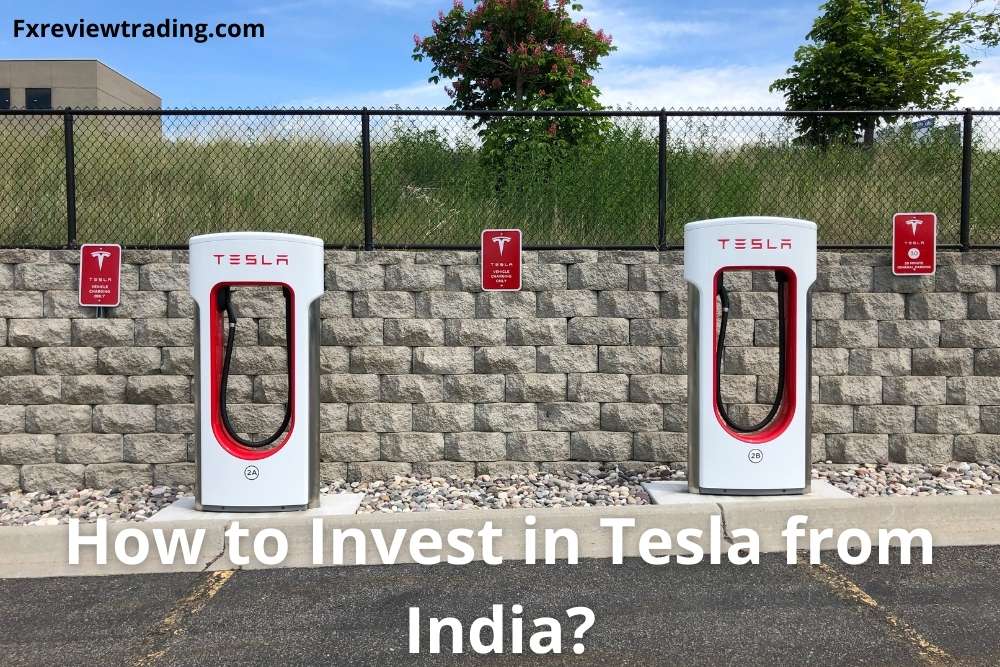 While driving a Tesla automobile on Indian roads is still a few years away, you can already invest in Tesla stocks from India and with the comfort of your own home or office. Tesla is one of the most innovative firms in the luxury car and sustainable energy industries. Tesla has made a position in the high-end Electric Vehicle (EV) industry because of its remarkable design and cutting-edge technology.

Some of their vehicles appear to be straight out of a science fiction film! Plus, there’s more. The Tesla stocks have risen more than $330 in the last year! So should you invest in Tesla stocks from India that is popular only because of its founder’s cult following? Let’s take a look at some Tesla Inc. facts and figures.

Is it A Good Thing To Invest In Tesla?

There is no one-size-fits-all answer to this question as to whether or not to invest in Tesla will depend on the individual’s financial situation and goals. However, some people believe that Tesla stock is a good investment because the company is still growing rapidly and has a lot of potentials.

In addition, Tesla has created a strong brand and attracted many customers, even though it is relatively new on the market. Overall, Tesla seems to be a promising company with much potential.

What is All the Fuss About Tesla?

Tesla is more than a car company or a sustainable energy enterprise. It’s a brand founded on Elon Musk’s nuanced business leadership and the value of invention and research.

Musk’s excellent track record of developing businesses like Zip2 Corporation, PayPal, SpaceX, The Boring Company, Hyperloop, and others can be a strong selling point for TSLA stock buyers.

Tesla has vehicle repair centers, supercharger stations, and self-driving cars and is heavily investing in R&D. Tesla’s auto sales account for the majority of the company’s total revenue. The main products are listed below:

Tesla Stocks- Historic Performances in Past

Tesla’s initial public offering (IPO) took place in 2010. At $17 per share, 13.3 million TSLA shares were available for purchase. TSLA has a market capitalization of 757 billion dollars. Tesla is now the world’s largest automobile manufacturer by a significant margin since its market capitalization exceeds that of its competitors:

Why should you invest in Tesla Stocks from India?

It can be tempting to put your faith in a firm that is founded on the principles of innovation and design. However, Tesla’s historical returns show that the stock has performed well.

However, other analysts believe that Elon Musk’s presence is the crucial cause for Tesla’s sustained growth. If this is the case, Elon Musk’s controversial words and actions may represent a risk to investors who have purchased Tesla stocks.

Invest in Tesla Stocks appears to be a strong choice based on its historical growth and benefits. However, your risk appetite, investment goals, financial health, and other factors can influence whether or not you should invest in Tesla stocks.

When you invest in markets other than India, you diversify your portfolio geographically. Diversifying is an excellent option to lower your risk. In addition, you should diversify your asset classes and industries, and you now have the option of investing in a new country!

Depreciation of the Rupee

The US dollar is one of the most stable currencies in the world, with minor changes. Long-term wealth-building can be aided by your investments in the US currency. The falling rupee and the strengthening dollar are further reasons to invest in Tesla stocks from India. Over the long term, investments in the US market yield significant and reliable returns.

How to Invest in Tesla Stocks from India?

Tesla stocks have remained popular among investors, and for a good reason. Tesla is distinct from other automakers as a firm. Let’s have a look at the causes for this. To begin with, Tesla is entirely focused on electric automobiles, and they have actually made electric vehicles a dream for many.

Then there’s the fact that they have better technology in terms of car parts and batteries. Third, they’ve constructed a massive supercharger network that spans 37 nations, making it easier to charge a Tesla car without having to worry about it running out of power.

Finally, they have vertical integration in manufacturing and distribution, which allows them to innovate and create technologies at a much faster rate while also increasing profit margins by reducing reliance on third parties. More information on what makes Tesla unique can be found here. Now, let’s look at how to buy Tesla stock from India. Here are three possibilities.

You can invest in Tesla stocks from India by opening a US brokerage account using a technological platform like InvestBy, or a foreign brokerage with a direct presence in India. Our goal is to make it straight and easy for you to invest in US companies.

You do not have to pay a brokerage charge to invest in Tesla stocks from India. Vested’s process is 100% paperless and takes only a few minutes to complete. All you’ll need is your PAN number, a photocopy of your PAN card, and proof of address.

You must wire funds to the United States in order to invest in US stocks such as Tesla. You can do this as an Indian resident under the RBI’s Liberalized Remittance Scheme, which allows you to send up to the US $250,000 per person per year.

Tesla’s stock price was US $1086.13 on December 27, 2021, which is more than 81,000. However, the high price should not stop you from investing in Tesla shares because Vested allows you to invest in fractional shares.

So, for as little as $1, you can buy a fraction of a Tesla share and own a piece of the firm. Watch this video to learn more about fractional investing.

You can also invest in Tesla stocks from India through an ETF. ETFs are a grouping of stocks and bonds traded as a single fund. They’re comparable to mutual funds in that they’ve invested in a pool of money. On the other hand, ETFs are exchanged on the stock exchange and offer a simple and inexpensive way to gain exposure to a sector or a group of companies. Buying an ETF via a site is one way to invest in ETFs.

For example, Brokers allow you to invest in index ETFs, which track the NASDAQ 100 index and include Tesla as one of its top holdings.

Another option to invest in Tesla stocks from India is to purchase ETFs that invest in US indices such as the Nasdaq 100. Tesla is one of the top positions in India’s Motilal Oswal Nasdaq 100 ETF.

You can also put your money into a fund of funds, such as the Mirae Asset NYSE FANG+ ETF Fund of Fund, which features Tesla as one of its ten equities. Remember that you don’t need to create a new US brokerage account to invest in these ETFs. However, monitoring faults in these ETFs may have an influence on your performance.

You will invest in Tesla Stocks from India of funds in this case, which is a local mutual fund that invests in a mutual fund available in the United States. There is no investment restriction because the investment would be made in Indian rupees.

Tesla is covered by mutual funds like Edelweiss US Technology Fund of Fund, but only to a limited extent. Furthermore, this strategy may prove to be more costly. Fees are charged to manage the fund.

The expense ratio is generally greater, as it includes an additional expenditure levied by the underlying international schemes they invest in and the usual India fund administration fee.

Remember to understand your risk profile before purchasing any investment. Directly investing in Tesla stocks from India would be a high-risk option for your portfolio.

Invest in Tesla Stocks when Blood is on Streets

Following the announcement of their cooperation with Hertz, Tesla stock has been rallying. Invest in Tesla stocks from India because it has surpassed a trillion-dollar market cap thanks to this headline and strong positive sentiment for its renewable energy operations.

Tesla became only the 6th company in the United States to reach this significant milestone. In Tesla’s instance, though, what jumped out was how little current earnings the business had to show for its trillion-dollar valuation.

Tesla stocks are far more costly than all of the previous firms that reached this milestone, with an estimated PE of 163 based on predicted annual earnings in 2021. When applying a traditional P/E valuation calculation, the most recent trillion-dollar firm prior to Tesla, Meta Platforms (FB), is valued at barely 1/7th its current level.

Ark Invest, one of Tesla’s most well-known backers, appears to believe so, having sold a large number of Tesla shares in recent months. Ark Invest has substantially reduced their Tesla investment in their flagship ARK Innovation ETF from a height of almost 3.8 million shares to barely 1.3 million shares (ARKK).

This investing began in early September and has continued into Q4, despite Tesla stocks’ price plummeting in the aftermath of Elon Musk’s controversial Twitter poll. Due to Ark Invest’s aggressive selling, Tesla’s weighting in its portfolio has dropped from above 11.5 percent to below 7.5 percent.

This is especially noteworthy given that invest in Tesla stocks trading in a narrow band of 8.5 percent to 11.5 percent for the majority of the year. This year, Ark Invest has made news for a variety of reasons, the most recent of which being its severe underperformance.

The extraordinary quantity of Tesla stock that Ark had been offloading during this lengthy decline, on the other hand, seemed to have passed under the radar.

2022 is going to be the Best Year for the Tesla

When Ark Invest sells massively out of one of its positions, as I described in my prior piece, invest in Tesla stocks from India as I can see this as a potential opportunity to get long the company.

I bought Tesla stock during the recent downturn because I believe 2022 will be a good year for the firm. Tesla is Ark’s largest holding in the portfolio, indicating that the company hasn’t fully lost faith in it.

It does, however, raise some concerns about Ark’s continued belief in Tesla’s future development prospects. In its most recent research report, Ark predicted a Street High $3000 pricing objective for 2025. Is it now more likely that Tesla’s worst-case scenario will come to pass?

Ark elected to forfeit a 32 percent CAGR on their investment by selling Tesla shares at a trough below $1000, provided Ark continues to believe in its base case of $3000 for 2025. I suppose that now that Ark’s estimated return rate for the next five years is 40 percent annualized, this Tesla sell was theoretically justified to them.

However, I do not believe that a 40% rate of return is reasonable to expect to invest in Tesla stocks over a 5-year period. Some of these recent criticisms have been considered, and Ark’s future return estimates have been slightly reduced.

Invest in Tesla stocks from India to diversify your portfolio and increase your chances of building long-term wealth. With its world-class trading platform, low-cost services, and quick processing, InvestBy can help you get started in the international market. Always invest after conducting comprehensive research based on your risk appetite.

For a knowledgeable investor, purchasing from a distressed seller can provide a once-in-a-lifetime chance. For its most recent Tesla prediction, I’ll continue to give Ark the benefit of the doubt.

We believe that investors with a high-risk tolerance might consider buying Tesla stocks. Tesla appears to have a lot of knobs to pull in 2022. The company seems to have an appealing runway for future expansion, with a basis in innovation and a devoted shareholder and customer base.