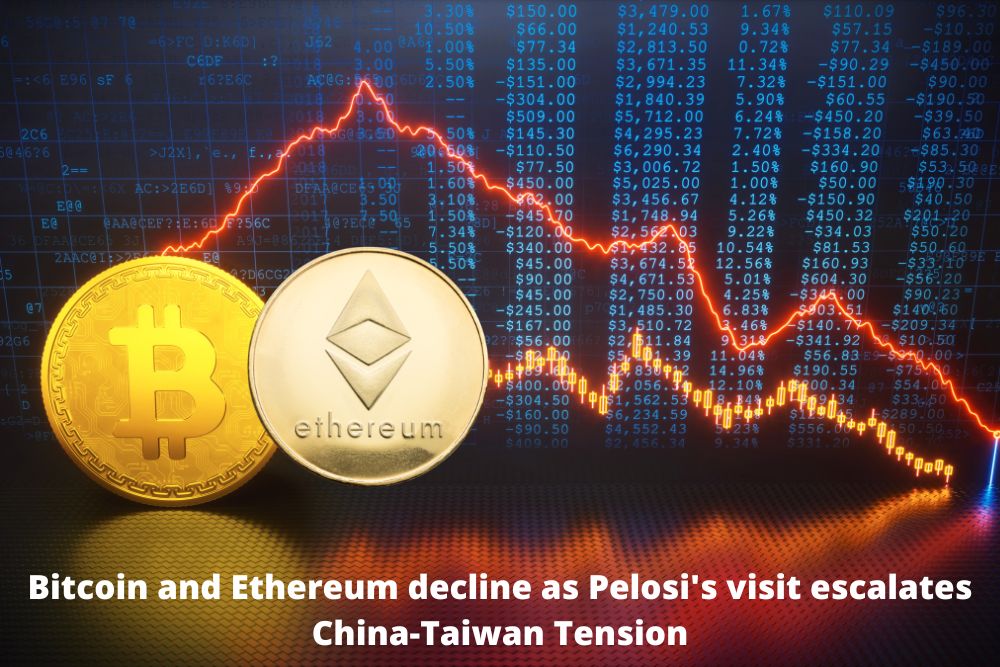 If Pelosi travels to Taiwan, there will be severe repercussions, according to a representative for China’s foreign ministry. The price of Bitcoin (BTC) is down 1.8%. Ethereum’s ether (ETH) suffered a 5% decline.

Traditional markets were also risk averse, with losses in the equity markets and the dollar strengthening versus most major fiat currencies (apart from the yen).

Beijing’s warning to Nancy Pelosi, Speaker of the U.S. House of Representatives, not to visit Taiwan was the cause of the market’s uneasiness. However, geopolitical tensions are unpredictable and frequently cause risk assets to respond hastily.

Even while markets were down, losses were manageable, possibly due to the perception that central banks would scale back or stop tightening if geopolitical tensions increased.

The biggest cryptocurrency by market cap appeared to be largely unaffected by the most recent crypto breach, which exposed over 8,000 wallets, including many Solana (SOL) addresses.

Beijing was undoubtedly trying to fuel the narrative by setting up demonstrations of military equipment on the beaches of the Chinese seaside city of Xiamen. The videos were left uncensored by Weibo’s censors, who are frequently fast to remove anything that is politically contentious from the platform.

Forty percent of Taiwan’s exports go to either China or Hong Kong, making China its biggest commercial partner. Taiwan is a significant trading partner for China as well. It ranks as China’s ninth-largest export market.

Taiwan also conducts a number of military drills near the coast of China. As many in the West believed that Pelosi’s approaching arrival was the beginning of the war, Kinmen served as a bastion of calm during this week.

It serves as the location for yearly live-fire military drills that are held not far from Xiamen.

China flies planes into Taiwan’s Air Defense Identification Zone, which is an area outside of a nation’s airspace that is under military surveillance. It avoids flying over the Taiwan Strait’s median line and generally keeps its planes well outside of Taiwan’s actual airspace.